PHOENIX – Expect people who are living on the streets to be exhausted from carrying around everything they own, all the time, Bonnie Ervin told her volunteer trainees.

Also expect them to be hypervigilant, she added, so don’t walk up on them without warning.

Ervin, a social work instructor at Arizona State University, knows how traumatizing life on the streets is – starting at age 8, she was homeless for months at a time. Years later, she still struggles with having a heightened startle response.

Ervin was advising the more than 50 students from ASU, the University of Arizona and Northern Arizona University she trained in mid-November on how to approach, communicate with and provide basic medical aid to people who are homeless. It’s her way of giving back.

The volunteers’ work is part of Street Medicine Phoenix, a new program created to provide medical outreach to the homeless where they live – on the streets. The help ranges from screenings for blood pressure and diabetes to referrals for physical and addiction services. And whatever helps people experiencing homelessness also improves the public health of the community, program leaders said.

The non-traditional approach serves people who are homeless but not living in their vehicle or at a shelter, a growing demographic in the Phoenix area. According to a 2018 count in Maricopa County, the number increased 27 percent from the previous year, to 2,618 people.

Those who spend time without shelter face unique problems, “with longer histories of homelessness and higher rates of behavioral health challenges,” according to the National Alliance to End Homelessness.

“Sometimes the best medicine is listening,” founder Justin Zeien said. “You’re not doing anything to them, but you’re doing something for them.” 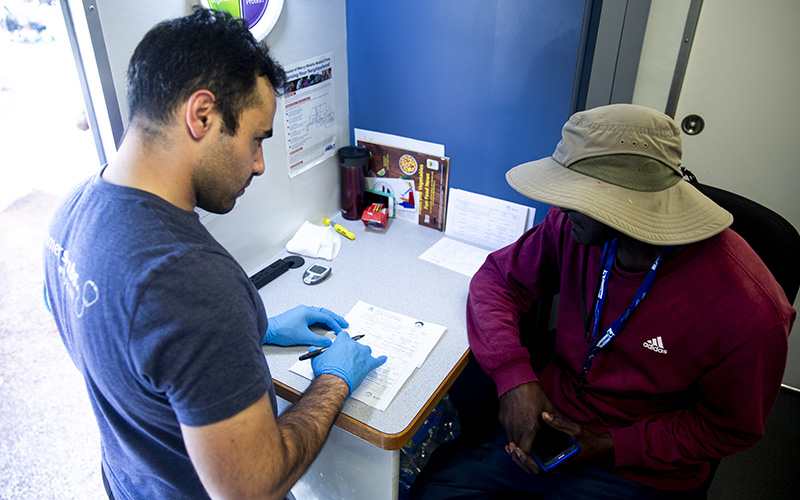 The street medicine model is about a decade old, but it didn’t take root in Phoenix until last year.

Zeien and co-founder Jeffery Hanna, who both earned master’s degrees in public health from the University of Arizona, explored downtown Phoenix over the summer. They approached 144 people living on the streets and asked them 16 questions. The intent: find out where the homeless seek health care and what resources they use.

“It really helped us to learn what those needs are,” Zeien said.

The people they spoke to put food as their most important need, followed by medical care, shelter and then transportation. Zeien and Hanna designed the program to connect people to services that exist, rather than only providing on-site medical care and health screenings.

“If their first priority is food, we give them a referral to a food bank nearby,” Zeien said.

Street Medicine Phoenix is part of Student Health Outreach and Wellness, a volunteer clinic run by health care professionals and students from Arizona’s state universities. Many of the volunteers involved with Street Medicine previously worked with the clinic.

“Teams of students are actually going to go out and engage people on the street — meet them where they are — regardless of whether they’re tied to a health care entity or not,” said Liz Harrell, the clinic’s program director. “The idea is to start building relationships and then referring (them) to resources before problems hit. We’re trying to engage vulnerable populations across the spectrum, before they even hit a health problem or need.”

Such work is not just for the benefit of people receiving treatment but for public health, said Dr. Jen Hartmark-Hill, a Street Medicine faculty adviser.

“As health care gets more and more advanced … the more people get left behind,” she said. “If we don’t collaborate and we don’t address the social determinants of health, we’re all going to sink.”

National health data show the average lifespan for those who are homeless is 42 to 52 years, Hartmark-Hill said, compared with the average life expectancy in the United States of 78 years.

“We need to know who the person is, not just what they have,” Hartmark-Hill said. 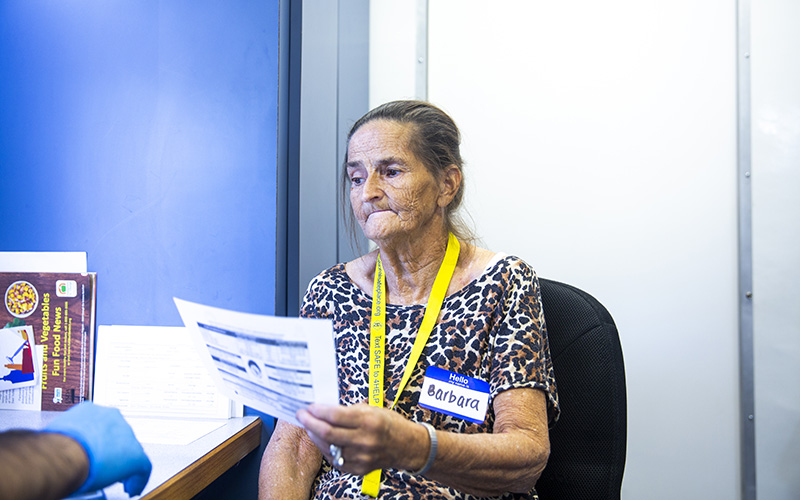 Barbara Lee Lannin has her blood-sugar level tested at a health fair in October organized by Student Health Outreach for Wellness. It was held at the Human Services Campus in downtown Phoenix. (Photo by Anya Magnuson/Cronkite News)

Addressing the needs of a unique population

When they started their research, Zeien and Hanna thought they knew what people living on the streets needed: medical care. But they discovered basic needs and basic resources are first in line.

Henry, who lives on the streets and didn’t want his last name used because of a stigma surrounding homelessness, reflected on how limiting such a life can be.

When you’re homeless, “every little thing that normally isn’t a big deal, is,” he said, adding that he sometimes spends a whole day waiting in line for a shower or to get food.

“This is a big city, there’s lots of resources,” Henry said. “The problem is a lot of people don’t know how to access them. The help is there. The hearts are there. You just need someone to facilitate.”

Hanna said Street Medicine could be the link to that care.

“We don’t want to reinvent the wheel,” he said. “We’re taking advantage of community organizations already established within our surrounding area.”

Someday, program leaders said, they hope health care will launch into a future that focuses on continuous care and a system that seamlessly connects services for the homeless.

We Are Street Med PHX!

Street Medicine Phoenix is a student-driven interprofessional healthcare and social justice team consisting of students and faculty primarily from the University of Arizona, Arizona State University, and Northern Arizona University. Our mission is to ensure access to quality healthcare for Phoenix’s homeless population living and sleeping on the streets.